If you were to open my kitchen cupboards and look at my dishes, you would assume that I was one of those “eclectic” people who chose to live in a state of “nothing matches”. My dishes are a hodgepodge of size, colour and type. I have stoneware, earthenware, Corelle, china and porcelain and only one of each pattern.

Why? Why would a grown woman have a cupboard full of dishes resembling a college student?

Because…….my name is Judy and I am a thief……a dish thief. 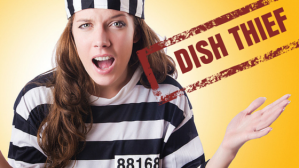 I steal dishes and everyone knows about it. It is our family’s, “dirty little secret” that isn’t so much a secret because they have taken to mocking me about my habit.

Let’s be clear. I don’t go into your home in the dead of night and steal crockery……no, I simply will accept food in said crockery and never return it.

Does that still make me a thief? Or does it simply make me lazy?

Like I said, my family recognizes this trait in me and has taken steps to cope with my little problem. Mom has taken to providing left overs to me in a plastic zip lock bag and my sister will snatch her dish off of the table as soon as we serve dessert, choosing to take it home without being washed.

“Oh Jess…..just leave it. I will wash it and return to you”, I would say sweetly.

Jessie would snort in laughter and place the dish by her shoes and purse so that she doesn’t forget it (and I do not accidentally place in my cupboard).

My family makes a point of “making a point” of returning things.

The other day I was at my mom’s and I could see that she had set out the little chair I had loaned her when she watched Grand-Baby Dylan. Inside the chair was a tea towel that looked freshly washed and (probably ironed…..my mom loves to iron).

Mom: “Do you see your towel? Then one I washed and put in Dylan’s chair for you to take home? (What I heard in my guilty conscience: Because I return things no matter how small or insignificant unlike someone I know)

She might as well have said, “Oh yes, here is a little sticker that stuck to my pants when I was at your house the other day. I didn’t want to keep it because it might be important and I return things….I am a thing returner….I don’t keep things.

I roll my eyes and laugh: “I get it mom…I am not good at returning things”.

FYI – I do not simply steal dishes, I steal books too!

When the children were little we would walk or ride our bikes to the library and take out books for the week. One day my card didn’t work (dramatization).

You see…….I had not returned all of the books from previous week(s) and apparently they wanted them all back….not just a few.

The trips to the library ended until I could find that damn book! I thought that librarians were peace-loving individuals but they take their books VERY seriously and if you don’t return them……….

That was the year I considered myself a “Patron of the Library” because of the fines and late fees.

I haven’t been to the library in years…..I am scared that there is a picture of me as a screensaver that says, “DO NOT LEND HER A BOOK”.

Both of us have become very nonchalant about it and a wee bit defensive. I mean….don’t lend us stuff that you don’t want returned. Don’t give us your favourite stoneware dish full of lasagna and then be surprised when you see it gracing our table weeks later when we invite YOU for supper. Don’t loan us your favourite book with the inscription from the author because you should know better and YOU ARE NEVER GETTING IT BACK!!!!!

I have come up with an idea to clear my conscience of my thievery.

When I die, I want my family to take every dish out of my cupboard and every book off of the bookshelf and take it to the funeral. When someone comes up to weep over my casket, I invite them to also look through the myriad of books and kitchenware and claim their plate, bowl, and covered dish or signed first edition.

Then I will rest easy.