I have not written about Ozzie’s sudden passing in my newspaper column. I had no idea that we would lose both of our fur-babies that close together. After Riley died, Ozzie walked about like a lost puppy….he mourned….he was so sad. He would not eat and was clingy which is totally unlike Ozzie. He had the appetite of a much larger dog and food was never an issue for him. As far as being clingy….Ozzie was his own “man” and in that respect he was like a cat…only cuddling if he wanted to cuddle.

This lasted a couple of weeks and then something remarkable occurred. Ozzie began acting like a puppy once again. He was running around the house with his toys and scampering up the steps on the back deck – acting so spry! His appetite picked up and we had our Ozzie Magoo back again.

Then one day I saw him stumble and strangely begin walking in circles. I panicked and took him to the vet, scared that I was going to lose him too. Ozzie had suffered something that many small dogs suffer, much like a stroke, but one that he could recover from.

Gathering him up in my arms I took him home and both Bob and I tended to him until he seemed “almost” back to himself again.

A month passed and Ozzie began to lose his appetite once more. We tried changing his food and offering him treats, but he didn’t seem to have that voracious appetite any longer. Then I noticed him trip as he went from the grass to the deck and he had difficult time regaining his footing. It was if he was drunk and he was weaving back and forth. I picked him up and carried him into the house.

Then he began to cough. Bob and I hovered near, worried sick that we were losing our Ozzie now too.

I took Ozzie to bed with me and let him snuggle alongside my legs. I felt like something might happen and I wanted to be near him.

At about 5:30 a.m. Ozzie began to cough once more and I picked him up and snuggled him on my shoulder like he loved to do since he was a wee puppy. I heard it then…his breathing sounded like a water pipe.

Waking Bob I said, “I think this might be Ozzie’s last day with us. Do you want to get up and spend some time with him?”.

We did. We made coffee and sat with Ozzie between us, rubbing his back and scratching his ears.

That afternoon I took Ozzie down to the vet again.

Ozzie was in heart failure and his tiny body was filling with fluid making it difficult to breathe.

I called Bob at work to come home and took Ozzie home while I waited. I sat on the sun-deck with Ozzie on my lap and I soaked in his presence. I told him how much I loved him, even knowing that his deaf ears could not comprehend the words.

When Bob arrived, he did the same thing – cuddling our wee dog in his arms knowing that he would be gone soon.

The hardest part of loving your pets is knowing when to say goodbye. We didn’t want Ozzie to suffer what would be a very difficult and painful death.

We returned to the vet. It was time to say goodbye.

Holding our sweet guy in our arms, we told him we loved him and that he was a “good dog” and then he slipped from our lives forever.

And now we grieve once again. We grieve for the loss we feel in our lives and how much we miss both Riley and Ozzie’s presence. 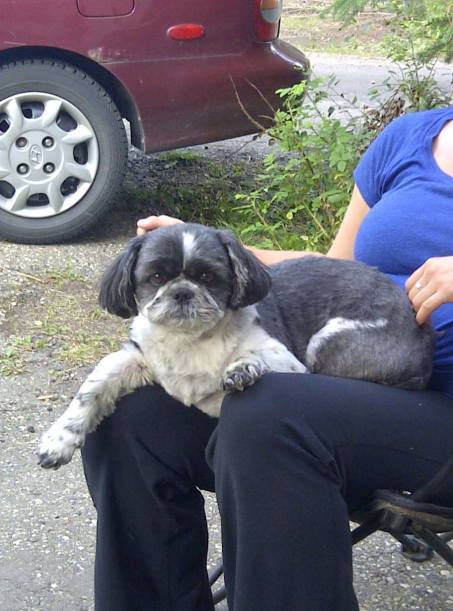