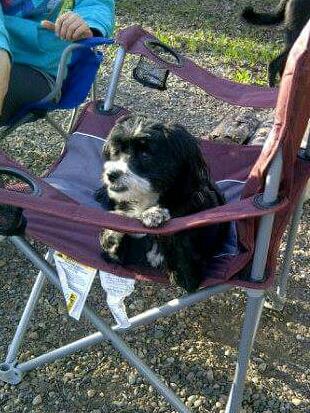 Ozzie stares blankly at the front door, his tiny wool beret sits at an odd angle, an unlit cigarillo hangs from his mouth.

Under his breath I am certain I hear him whisper “Pourquoi?” as he shakes his head in confusion.

He has been this way for a few days now. Ever since the frantic flurry of activity where his buddy, his lifetime companion, was scooped up and carried out the front door to a waiting car: “The “Feeder” had not even put proper footwear on, nor changed out of her pajama pants. Perhaps she is going to Walmart? Why would she take Riley with her? Why did she return without him? Did Riley go to the groomer?  We always go together?

Hmmmm….something does not feel right.

Poor Ozzie. He has been wandering throughout the house for days now, mourning the loss of his friend.

We humans have been doing the same thing.

Throughout the years I have mentioned my dogs in this column. I have anthropomorphized them to the point where I image Ozzie with a beret and a cigarette and Riley as a skinny old man with obsessive-compulsive disorder.

Last week we lost our dear Riley. It was very sudden and we are still coming to terms with that missing piece of our lives.

You knew that I had to do this. I simply had to share with you, “The life of Riley” which in retrospect, really was as delightful as the definition.

Riley was a pet store puppy. Literally we pointed and asked, “How much is that doggie in the window”.

At the time, Bob was looking for a puppy to be his travel buddy. Someone to sit in the seat next to him, keep him company and be his best friend.

Riley had other aspirations and they didn’t involve riding around in the truck all day. This was the scene every morning when Riley was a puppy:

Bob places Riley on the floor beside him while he puts his work boots on.

Riley scampers off to the bedroom and climbs under the covers beside me pretending to sleep.

Bob picks Riley off the bed and takes him to the truck.

After a short time, Bob realized that he was fighting a losing battle. Riley was not going to be the truck companion of his dreams, instead Riley was going to stay at home with mom (me).

Riley was a Shih Tzu – Cockapoo cross with long legs and a pointed nose. Very little Shih Tzu was involved in his genetic makeup. He was a lovable conundrum with soft black hair and tiny paws that he would place on the most tender, sensitive part of your anatomy as he walked across you in bed.

Riley had a severe under-bite that scared small children. I believe that he became a loveable, gentle, patient dog as a way of saying to the world “don’t judge me by my looks”. After he won a stranger over with his charm, that under-bite became a smile.

Riley was our OCD dog – watching him eat was a study in animal anxiety. He was afraid of flying bugs and in the summer he would vacillate between loving the sunshine warm his sore back and the fear of being stung by a wasp.

Riley disliked a bed that was made for some reason and after I made ours, I would hear a rustle and go in and see the pillows on the floor and the bedspread crumpled: Clearly a sign that Riley had been there.

Once we brought Ozzie home, the family bed got a wee bit crowded. We moved the dogs into their own beds on the floor. Ozzie will sleep on anything, but Riley was partial to a small down-filled duvet. He would nest until he was curled into a little ball and we would hear the most contented sigh.

My sister told me, “When you give an animal a life so good he sighs in contentment, you’ve done a very good thing”.

It is true, Riley did have a very satisfying, long life, but we are never prepared for a pet to leave us. My thoughts after he passed away? “If I had known that I was going to lose him today I would have held him closer yesterday”.